Well, last Wednesday night. Instead of our usual 100yen sushi night, we celebrated Warrick’s birthday by going out for some Yakiniku and Galbi. When things go well, many JETs and local Japanese like to go out for a cook your own meat session. Not really a place for vegetarians. Actually, Japanese is not vegetarian friendly at all, since everything tends to have some form of meat or fish broth in it. Anyways, a few photos from the event. Plenty of chicken, pork and beef goods as well. It was also nice to see the others after my absense of about a month from the area. As Sarah always loves to put it, it, “Good Times” 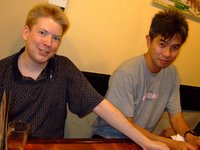 Alan and the birthday boy Warrick 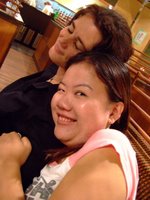 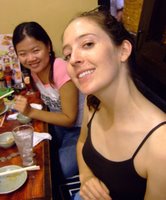 On Saturday, the last Kashiwazaki Beach BBQ took place. I must admit that since many a times, I must work one of the days during the weekend due to my job, I don’t get out to see many people that often. And eventhough most people are about to leave after a whole year in Japan, there were plenty of people I’ve never met, nor haven’t seen for over half a year. I guess that’s what happens when you get a tad older, also have relatives to see within Japan, and wish to travel else where than the norm. I’m not anti-social damn it! Just unfortunate bad timing all the time. And too many commitments. Hmmmm, 3 nights every week is always taken up, and at times 4 of my week nights are taken up with commitments as well. Taiko lessons happens twice a week, I teach photography at a neighbouring Youth Centre every other week, and also host club/circle called the Language Salon at the Sanjo Youth Centre, where people come to converse with other foreigners, to share their culture and gain understanding of each other.

The only real social thing I’ve got going on a regular basis is going out for 100yen sushi (Genki Sushi) every Wednesday evening. Oh! What about my weekends? I must do boring things like catch up with sleep, do laundry, other house keeping duties, grocery shopping etc. And, I also spend it, doing my best to catch up with unreplied emails.

So, anyways… back to the whole Kashiwazaki Beach BBQ. Was nice to meet up with many friendly face. Kristi and I drove up together after helping her ship some of her furniture. Plenty of hamburgers, salmon steaks, hotdogs and a fabulous Jungle juice to go around to all. All in all, a fabulous gathering. Man, I literally caught up with a few faces I haven’t seen since August of last year. Tee hee. 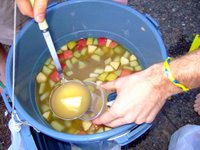 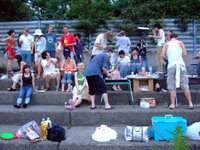 Not quite the beach, but… 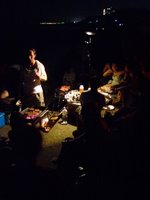 Even in the dark we had plenty of fun. 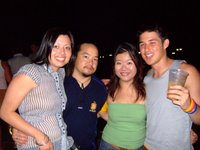