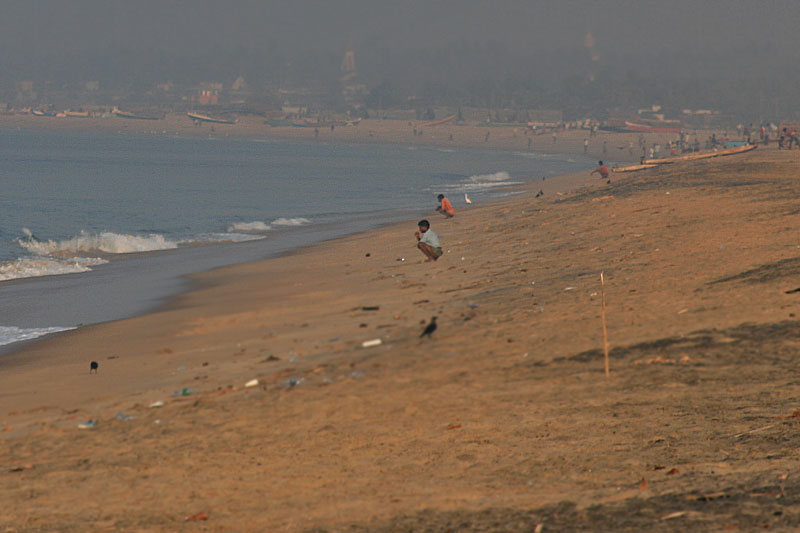 As I cycle down the south west coast of India, I’ve come across a number of beaches. All in all, I’ve come to a few conclusions about them.

1. They’re not actually beaches, but free use toilets for the locals

During the day, many people can be seen enjoying the sun, or splashing in or along the waters of most beaches. Fishermen casting their nets or fishing lines. In the evening, people just chilling out by the water, and the fishermen fixing their nets and hauling in their bounty.

But in the early mornings, as I found out recently by Kollam beach (where during the night, I was surprised to see hundreds of 4-6inch crabs running up and down the beach, also enjoying the coming and going of the waves), there were many man-made dug out holes to be found everywhere. And what do I find? dootie. Morning duty, whatever you call it. Pretty much, holes with sh*t everywhere. Just by the tidal water line. And looking down the beach, I can see number of people down the sandy beach, crouched down flexing their buttocks, releasing their evening meals to sea. Finishing off the job by washing their happy anal sphincter and then walking back home.

2. Only westerners bathe the sun

Not all beaches are for sun bathing, nor for westerners. Sure, there are plenty of beaches around Goa, Varkala, Kovallam, where countless bodies of westerners lie on the beach, slowly cooking themselves under the south-Indian sun like a nice roast. But where are all the locals who enjoy the sun. Most of the time, (beaches where westerners are seen beach bathing) amongst the crowd of pasty white skin, male and female there are groups of fully clothed Indian men who slowly weave their way between all the flesh exposed bodes. Probably imagining some fantasy Bollywood dance sequence where the foreign girls start pawing at them or something like that.

3. It’s not just a toilet, but also your rubbish bin

Wherever you go along whatever beach, it’s everywhere. Rubbish that is. And if you’re ever here, do be surprised to see shop, restaurant owners, walking across the path, to the beach and simply dumping their daily rubbish (oh yeah, for some of you… rubbish also means garbage, trash, crap) by the back of the beach. Not quite sure if they’re locals, but many Indians enjoying the beach can also be seen throwing their finished lunch, dinner, picnic, whatever into the water. Sure, I can understand biodegradables being tossing into the water, in hopes that some of the marine life might consume them… but purposely tossing plastic water bottles, plastic bags, aluminium foil, essentially non-burnable rubbish into the water? I just don’t understand the environmental education system here. I’m sure that we’re not all perfect, but to see this every time I’m at the beach is simply unbelieveable.

But somehow, we all end up at the beach swimming amongst all the trash. Heck, then again… a few weeks ago I bathed and swam in the Ganges up in Varanasi. Talk about toxic.