During my Language Salon gathering last night, a couple of words came up that were discussed. There are various English terms and Japanese terms that don’t possess a direct translation or how certain words may mean something else. There are plenty of cases of that in every bloody language. Sure, there were plenty of cuss words we briefly discussed, but the two words I’d like to share with you are the words, “Hibachi” and “Mottainai“.

First off, I’m not sure if it’s used else where in the world, but in the area where I grew up in Canada, the word hibachi was quite common. Nothing exotic about it. It was simply just a word. And you’d only ue it, when you were talking about one. Sure, we had our BBQs (Barbecue) but if you owned a small one, where the grill and charcoal holding container wasn’t supported on a high stand, it was a hibachi set. When using a BBQ, you stand, and if you were using a hibachi set, it was eiter placed on the ground, or placed on the picnic table, and you sat by it. Hibachi sets are much cheaper to own since in N. America one tends to buy a BBQ set that is operated with Propane and other flammable liquids. In Japan, you can find cheap hibachi sets for less than 2000yen (18US) 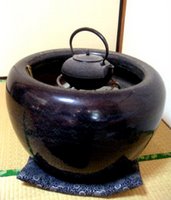 But in Japan, the word hibachi conjures up a totally different image. The word hibachi is said to be introduced to the English language in 1863, from the Japanese word hibachi, which literally means “firepot,” from hi “fire” + bachi “bowl, pot. In Japan, a hibachi is more known as a traditional heating device. Usually a cylindrcal or box shaped container that contains ash and slow burning coal is placed inside to burn. Some people would simply use it to heat their homes (before modern heating, stoves) and some would stick a kettle on top to also boil some water to put moisture in the air or to simply have hot water. With a small grill, fish or rice cakes could also be grilled. But all in all, it’s meant to be used as a means of keeping yourself warm. A pair of chopsticks stuck in the hibachi so that you can move the coals around. And when traditionally using a hibachi, you would only put in a handful of coals. Never a full bowl. Since that would simply be being spoiled.

In North America, hibachi-style is also recognized as Teppanyaki-style (鉄板焼き). Which is seen more outside of Japan, than within Japan.  Teppanyaki is the one where there’s a large metal table that’s heated and a chef comes along to cook and also entertain you at the same time. Sometimes, showing off his/her knife skills, slicing and dicing the meat in front of you, juggling utencils and other stuff.

So, quite the difference when it comes to the definition of a hibachi doesn’t it? 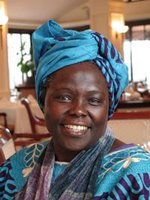 And now for the second word. Mottainai “もったいない”. In the Japanese language, the word mottainai directly translated means “wasteful”. It can also be used as a sentence on its own, then meaning more towards the line of “What a waste”. And currently this Japanese word is now being used as the catchphrase by the 2004 Nobel Peace Prize, Wangari Maathai. But, the meaning/the content of what it represents has been slightly altered to assist her needs. First off, if you don’t know yet, Wangari Maathai is a Kenyan environment and political activist, and is also the founder of the GBMI (Green Belt Movement International). And for those people who don’t know of the GBMI, it all started as a grassroots non-governmental organization (NGO) with the idea of planting trees in Kenya. Through planting trees, the roots of the trees can help combat the ever growing desertification, floods (by absorbing water, and creating soil) and also address other issues of rights such as education, womens’s rights, access to water, family planning and safe sex.

Anyways, Wangari Maathai is utilizing the Japanese word Mottainai to represent the Four R’s. Yeah, that’s right. It’s no longer the three R’s in which so many people have been taught. Reduce, Reuse, Recycle, and finally Repair. Though, one can easily argue that Repairing is the same as Reusing. Nevertheless, it’s all useful to keep in mind. Mottainai: The Four R’s (Reduce, Reuse, Recycle, …and Repair) Many of the local Japanese couldn’t believe me when I stated that there are people in Germany, Ireland, Netherlands, the UK and others that now utilize the word mottainai as part of their vocabulary. I hope that the people who attend my evening gatherings will now feel some pride that a word from their native language is now starting to be used all over the world to represent a worthy cause.

And now, I hope that some Japanese people have learnt a lesson from a word from their own vocabulary.
Reduce, the amount of disposable items you can purchase in Japan.
Reuse, those working electronics instead of constantly buying new items. (Though, there are many more second-hands shops in Japan since I was last here 9 years ago) Recycle, as much as you can. And fortunately, I find that there’s much recycling here in Japan, but I must admit that there would be less need to recycle if they simply just reduced using soo many disposable products.
and finally,
Repair, things that are broken instead of buying the flashy brand new stuff. Everybody here is so into the new New NEW.