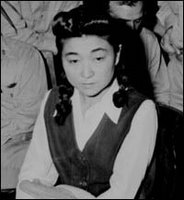 I was watching an old episode of the Simpsons, and there was a brief, cameo, whatever you call it,… an appearance of Tokyo Rose, working at a diner. For many people especially in the US, you hear of the name, Tokyo Rose, but do you actually know who this person was/is?

A while back, I did a brief search on her and found out a fascinating story. A Hollywood movie on it’s own. And to my surprise, I’ve also read that George Takei (also known as Lt. or Captain Hikari Sulu in the StarTrek realm) may be in the works to actually produce a film about the life of Iva Toguri, better known as the person who was accused and convicted to be the infamous Tokyo Rose. I’m not sure if this project has actually taken off, since the article was from early 2004.

In any case, with plenty of urban legends that surfaced after the Second World War, many believed (mostly the US government) Iva Toguri to be the one and only Tokyo Rose. Though there were many other English speaking female radio broadcasters at the time.l I’m sure that some of you may have heard the urban myth that Amelia Earhart may have been Tokyo Rose. Though, through the various radio recordings, no one was able to recognize her voice. And according to a online paper that was posted back in 1998, she’s still living in the Chicago area. Born on July 4th, 1916 and time is ticking away before her story can be told. Since the article is 8 years old, I wonder if she’ still around.

They Call Her Tokyo Rose, by Keith O’Brien

Well anyways, instead of leaving you in the dark about her. I guess that I’ll write a brief bio about Iva Toguri. I’ll keep this really short. She was born in California, from Japanese parents, and her aunt on her mother’s side was very ill, so she travelled to Japan to take care of her. Unfortunately, her mother couldn’t go herself since she was also a tad ill as well. Off to Japan, without knowing much about the language. And then, the attack on Pearl Harbour. She’s stuck in Japan. She ends up working for the national Japanese Radio station, amongst many other English speaking ladies. Her job was to help decrease the morale of US soldiers whom were stationed all around S.E Asia. A late night radio program call the Zero Hour, since it was broadcast at midnight, would play plenty of US classic tunes and have propaganda aired. Such verses telling soldiers that they should go home, since their wife is cheating on them.

After the war, she was charged with treason (more detailed info on other sites), arrested but then pardoned while later. I won’t go into details since I’m too tired to type it down.. but check out the other sites, or do a search on her online. As facinating story in itself.