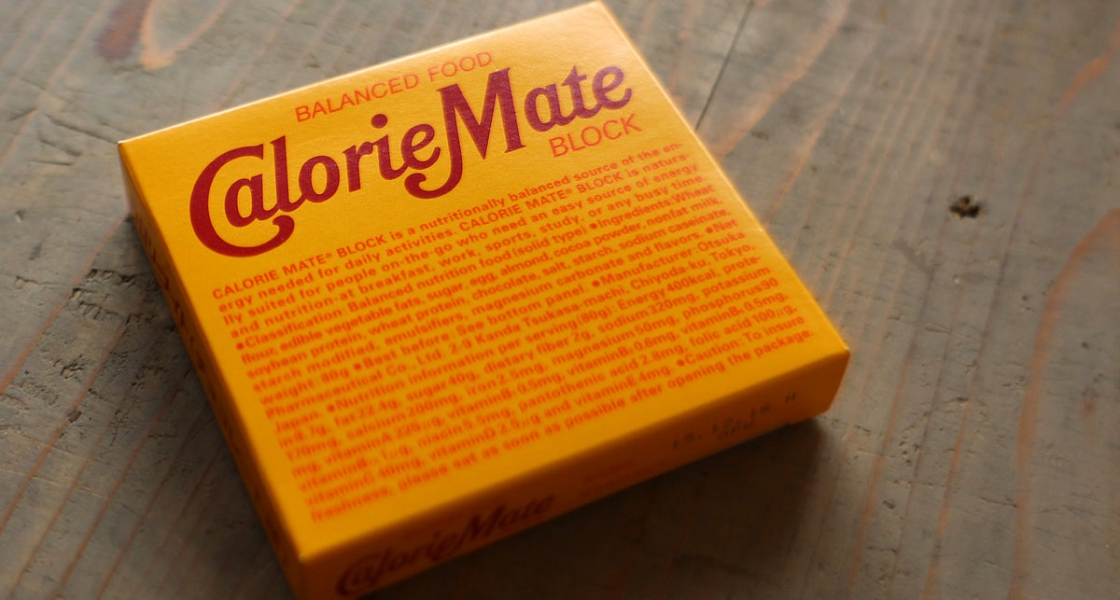 In North America, when you think of a supplemental energy bar or meal replacement bar you might imagine some form of food bar, containing cereals and some really fit athlete hanging off a cliff or at least some buff person doing something really active. Though products such as CLIF Bars and PowerBars do exist in Japan for the really active person, probably the most known and common energy/meal replacement product is “CalorieMate” which is produced by Otsuka Pharmaceutical Co. CalorieMate hit the Japanese markets in 1983, which is pretty early, though 10 years after Soylent Green hit the screen in 1973. Still, pretty early for Japan as PowerBar didn’t come around until 1986 and CLIF Bar in 1991.

Compared to the many cereal bars in North America, CalorieMate is more like a shortbread, or bar shaped cookie. And you’ll find many outdoor enthusiasts carrying a pack of bars as emergency rations or as supplemental snacks. Of course, it’s also not rare to see the early morning salary man in Japan chewing on a block of CalorieMate, which provides 100kcal of energy, while grabbing their train or bus to get to work. There are various flavours available, such as plain, maple syrup, chocolate, cheese and fruits. Also more additional flavours if  you try store brands which can also be easily found.

Theses days, there are many other types and  brands of energy and meal replacement bars  on the market, but CalorieMate pretty much still rules the market in Japan. According to a few market research websites, CalorieMate claims 31.8% to 38% of the cereal bar market 12. Another product of Otsuka Pharmaceutical which was also doing well back in 2007 was Soy Joy, though by 2010 it seems to have lost much of the market to competitors3. Though chocolate bars such as Snickers and Mars bar are sold in Japan, knowing that they contain high sugar, fat and calorie content seem to be a barrier.

Next time you’re in Japan and have the opportunity to go outdoors, check your local camping supply shop, drug store, convenience store, and most supermarkets and give a Japanese energy / meal replacement nutritional bar a try. They’re pretty much the same as Scottish shortbreads, but a bit different.

Important tidbit, don’t forget to also grab a drink as they can also suck all the moisture from your mouth.