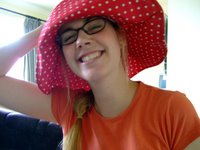 I went off and hired a car for the day, so Sasha and I could discover some of the small corners of County Clare. We started late in the day, after taking our time just relaxing in bed. It was cloudy and actually looked quite miserable out there. When out on the west coast of Ireland, you can always look out to the Atlantic (west), look up and read the clouds, and you’ll know what you’re in for the next wee while. We were in for some strong wind and some showers. Well, at least we’d be in the car and outta Ennis. 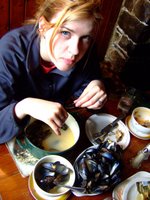 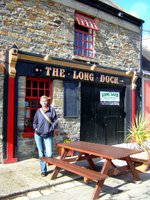 Sasha works at a restaurant called the Long Dock, in Ennis and it’s a semi-fancy place. Though the original restaurant is in a place called Carrigaholt and we were actually off there to see what it’s like. The shop in Ennis is quite modern and contemporary, whereas the one in Carrigaholt is like your proper old pub. Personally, I find that it has more character. It’s known for it’s Seafood chowder and bucket of steamed mussels in a white wine garlic sauce. So, fancy that, guess what we ordered.

After packing it in, we finally reached the coast. Our original plan was to aim for the Loophead but somehow we ended up at the Bridge of Ross, and opted out discover every tid bit of this place. I personally thought that we’d just do a quick few minute walk around, but Sasha was really enjoying the location, so who could walk away from there. It was already past 6pm, and if I were in Japan, it’d be getting dark already, eventhough it’s June. But here in Ireland, you could still read a book outdoors up to 11pm. 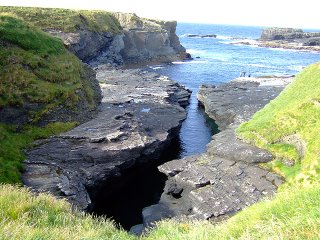 At the Bridge of Ross

At the Bridge of Ross, there’s a cool cliff line, a wee cave, underground stream, and the wonderful sounds of the waves crashing against the land. I was starting to feel a tad tired, and began to have a wee tickle in the back of my throat, but who knows the next time I’ll be able to enjoy the ocean side with Sasa again. Might as well enjoy it, as she’s having a fabulous time. Once again, she’s more or less stolen my digital camera and is busy taking many photos and making many silly movies. 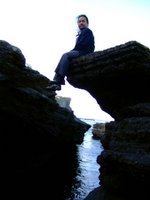 I was already starting to feel ill by this time…
But, still a wonderful view and place to chill out. 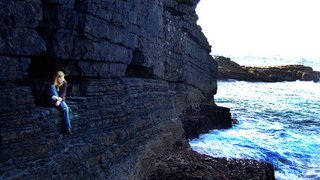 Sasa did a bit of climbing around and found
herself a wee cove to sit down and enjoy the view. 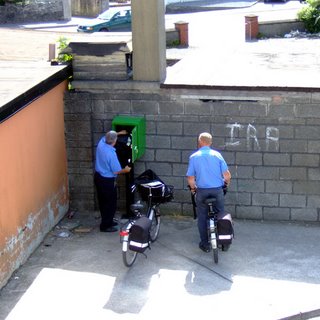 What’s this!? Naw, it’s just the postmen doing their job
amongst the wonderful graffitti of Ennis.